To recap from last week:

1. The formulae for one offspring per mating and with mates from the same group
(eg all are known carriers, or all are daughters of the tested sire, or all are randomly selected from a population) are:

a. Confidence level for known number of matings

b. Number of matings needed for known confidence level

2. The formula for one offspring per mating and with mates from the same group
(eg multiple groups of mates, such as a group of known carriers as well as a group of daughters)

We need to modify the formula in 1a above so as to calculate the level of confidence:

Breaking this down, we have:
i is a counter referring to the individual groups of mates (can you see this subscript to the PAA, PAa, Paa and n?)
k is the number of groups of mates
Π, the capital Greek letter pi, stands for ‘product’, a word in maths that means ‘the result obtained when multiplying numbers together’

means ‘calculate the stuff inside the parentheses for i = 1 (the first group of mates), i = 2 (the second group of mates), and so on for all i = k groups of mates, and then multiply the results together’. 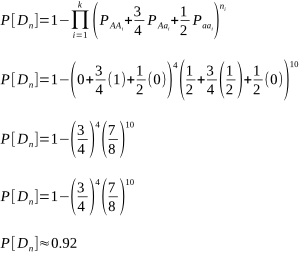 If not one recessive animal is born, we can be 92% confident that this particular sire won’t be a carrier. It would be worth adding a few more matings to increase this level of confidence a bit more, especially if some of these don’t go to full gestation.

Can we do the reverse, and calculate the number of matings needed for a known confidence level? Unfortunately as there is more than one n (one for each mating group), we cannot easily solve for n though we may have a level of confidence we are aiming for.

3. The formulae for multiple offspring per mating and with mates from the same group
(eg in species that twin or have litters)

a. Confidence level for known number of matings
For species with multiple births that average m per mating. Let’s test a ram by mating him to six daughters that average twin births: 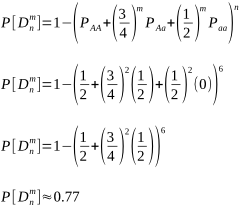 b. Number of matings needed for known confidence level
How many matings would need to be done to get the level of confidence up to 95%? 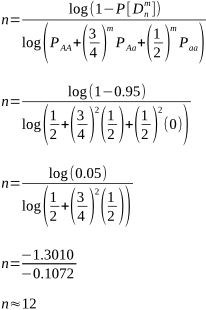 4. The formula for multiple offspring per mating and with mates from multiple groups
(this is a generalised formula that can be used for any test mating scenario)

a. Confidence level for known number of matings

For species with multiple births that average m per mating. Going back to the test ram above, there aren’t another six daughters available, but there is access to a known carrier that averages a single birth: 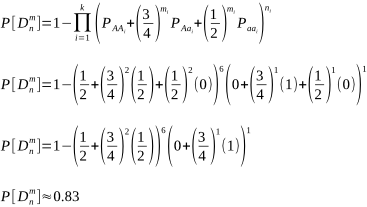 Should she too average twins, the level of confidence would increase again: 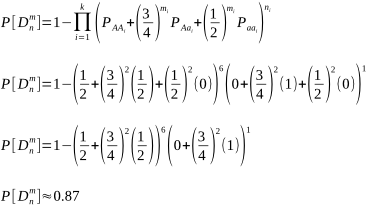 Next week we’ll wrap up all this maths with some tables summarising levels of confidence and numbers of matings required for various scenarios.

The aim of this blog is to slowly step people through the science of animal breeding, and how to apply this science to their own breeding programmes.

Some of the concepts will be heavy on genetics and maths, so be assured it will be baby steps along the way—and if these can be conveyed such that people with no background in either can understand, then I will be very happy!

All feedback good and bad is solicited, and any suggestions for posts much appreciated.